Back to Home Page
The following is a Scanned, OCRed, HTMLed document. I did correct quite a bit, but there are likely more errors.
CONFIDENTIAL—Modified Handling Authorized

DEPARTMENT OF- THE ARMY TECHNICAL MANUAL 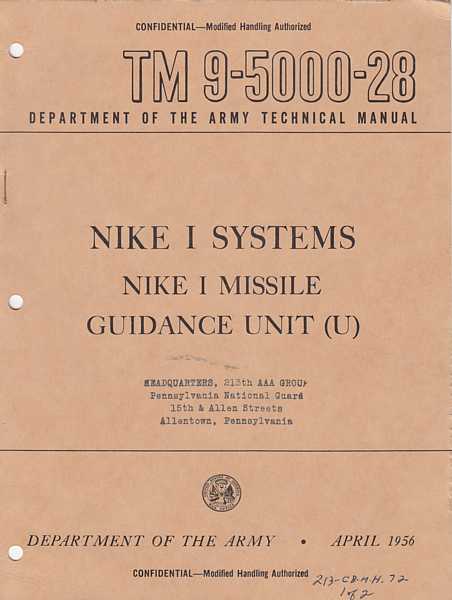 
Figure I-8 gives a cross-sectional view of a Nike I antenna. The antennas are faired, round waveguides of 0.9-inch inside diameter with a 450 minimum radius bend inclined toward the rear of the missile. A simple open end is used as an orifice at a distance of 3 inches from the missile surface. Mica-disk air seals are used on both ends of the tube to eliminate dust and dirt, and to allow pressurization of the guidance section.


As shown in figure I-36, the r-f detector cavity is formed by two converging sides of the waveguide section and is dimensioned to provide uniform sensitivity over the 8,600- to 9,400-mc operating range. The cavity has a nonuniform radius to provide low-Q, wide-band characteristics. Electrically, the resonant cavity is equivalent to a tank circuit; it presents a high load impedance to the frequencies to which it is tuned, and a low load impedance to other frequencies. The crystal detector is located in the geometric center of the cavity, which is the focal point of the energy reflected from various points along the converging walls of the cavity. Two resonant cavities are employed in the missile receiving system, one for each receiving antenna.


Figure I-10 is a diagram of the detector assembly. The crystal detectors used with the r-f detector assemblies are matched silicon diodes. They are designated as type 1N23B. The crystals convert the incoming r-f signal energy to d-c command signals by shunt limiting. The resulting d-c voltages are coupled to the video amplifier through two parallel-connected coaxial cables. The distributed inductance and capacitance of the coaxial cables serve as a filter to remove the r-f components from the d-c pulses. Because the two crystal detectors used with the guidance unit are electrically in parallel at the input of the video amplifier, the crystals must be carefully matched to prevent one crystal from loading the other. A d-c bias current of approximately 50 microamperes is passed through each crystal detector. This bias current is in the direction of crystal conduction, thus lowering the impedance of the crystals. This improves the crystal-to-cavity impedance match and also provides a low-impedance voltage source for the coaxial cable. If driven from a high-impedance source, the coaxial cable will tend to distort the d-c pulses. The pulse width of the incoming r-f pulses is 0.18 micro second. The output from the detectors is an FM train of d-c pulse pairs. The d-c pulse width will slightly exceed 0. 18 microsecond due to pulse stretching in the coaxial cables.


The Nike I guidance unit utilizes a type 6229 magnetron to furnish the beacon return pulse. The magnetron is a cavity resonator-type employing a grounded anode and a negatively pulsed cathode to generate 0.25-microsecond 700-watt pulses of r-f energy. The average power output of the magnetron is 0.35 watt. The resonant cavity section of the magnetron is the symmetrical "strapped vane" anode composed of 12 resonant cavities cut into the anode block and extending outward from the concentric cathode.

The straps connect alternate vanes that are of equal potential and pass over adjacent vanes which, at the mode frequency, are 1800 out of phase. This is called the pi mode of operation. The output frequency of the 6229 magnetron is tunable from 8,900 to 9,400 megacycles by means of a tuner shaft that varies the cavity dimensions. The frequency is adjusted to be different than that of the MTR to allow the radar to distinguish the beacon signal from reflected signals of its own beam. The magnetron tuner shaft is accessable from outside the guidance section casting by removal of the -P antenna (antenna 3), 1800 from the antenna marked +P on the housing casting. The r-f output of the magnetron is coupled directly into the waveguide by means of an exponentially tapered output transformer. Physically, the transformer is an extension of the anode block of the magnetron.


The control section is a principal subassembly. of the guidance section. It contains the amplifiers that provide the power to operate the missile solenoid valves in response to d-c signals from the signal data converter and the night control instruments. The night control instruments include the roll-position and roll- rate gyros, the P and Y rate gyros, P and Y accelerometers, and the stagnation pressure transmitter. Figure I-29 is a functional diagram of the missile control system.

To satisfactorily carry out a maneuver, three circuits that produce, degenerative feedback voltages are provided in the missile. These three feedbacks correspond to the three motions involved in a maneuver.

The second feedback is that of the steering rate gyros. The magnitude of the rate gyro feedback depends upon the rate at which the missile rotates about its center of gravity.

A steering order in excess of 2g in the P-channel will be considered. The steering order causes an unbalance in the solenoid valve, and hydraulic pressure is applied to the fin actuating cylinder. The P-fins are fully deflected. Maximum feedback is obtained from the fin potentiometer but its magnitude is not sufficient to overcome the steering order. The fins therefore remain in the fully defected position. Air currents acting upon the deflected fins cause the missile to rotate about its center of gravity with the nose moving in the direction of the intended maneuver. This rotation about the center of gravity, if continued, would eventually cause the missile to tumble end-over-end.

To prevent tumbling and to start the missile into a constant angle of attack, the P-rate gyro, sensitive to missile rotation, produces a feedback that is added to the fin potentiometer feedback. The combination of these feedback voltages is sufficient to overcome the steering order. The solenoid valve becomes unbalanced in the opposite direction. This causes the fins to move away from the fully deflected position. This movement of the fins causes a smaller feedback from the fin potentiometer. A state of balance tends to result in the solenoid valve, and the fin position become fixed. For the fins to become fixed in any position other than that of full detection, a balance must exist in the solenoid valve. The new position of the fins almost stops the rotation of the missile about its center of gravity. An angle of attack now exists between the longitudinal axis of the missile and the direction of night. Lateral acceleration results from air pressure exerted against the airframe.

The missile now picks up a lateral component of velocity as well as the longitudinal component; this results in a curved night path. Lateral acceleration is detected by the accelerometer, which provides an additional feedback voltage, the magnitude of which depends upon the degree of lateral acceleration. The accelerometer feedback is the largest controlling feedback involved in the missile turn. The sum of these feedback voltages opposing the steering order eventually results in a condition of balance in the solenoid valve, thereby positioning the fins to maintain a slight rotation of the missile about its center gravity. The angle of attack is kept constant by this rotation of the missile.

A constant angle of attack will maintain a constant turn radius in the missile flight path. These conditions will prevail during the time the magnitude of the steering order does not change. As the missile approaches the designated course, the magnitude of the steering order decreases, permitting the feedbacks to override it. The unbalance created in the solenoid valve causes the fins to assume a lesser degree of deflection. Rotation about the center of gravity decreases and the angle of attack diminishes. With a continuing reduction in steering order, this process continues until the angle of attack reaches zero, at which time the missile no longer has a lateral component of velocity and turn has been accomplished.


The battery is a nickel-cadmium type with a potassium hydroxide electrolyte. It consists of 24 cells in series, producing a potential of 28 volts with a capacity of approximately 3 ampere hours. The battery is approximately 6-1/2 inches high, 6-1/4 inches long, and 4 inches wide. It weighs about 11-1/2 pounds. As shipped from the factory, the batteries are filled with electrolyte but completely discharged. Vent plugs must be installed in the cells before charging. When discharged through 2.8 ohms at an ambient temperature of 750 + 70 F, the battery must maintain a potential of 28 volts +10 percent for at least 15 minutes. The missile guidance unit will draw an operating current of 9 amperes from the battery during the missile's average night time of 60 seconds. Since this amounts to only one-twentieth of its total capacity, it can be seen that the battery is very conservatively rated for its intended use.